Willem Blijdorp, the big man behind the B&S stock exchange fund, appears to provide large mortgage loans to the cultural elite and convicted money launderers through a foundation. The Vereniging van Effectenbezitters believes that B&S should have reported this because Blijdorp owns 67% of the shares of B&S. 'You want to know from him in what kind of environment he operates in business, whether dependencies are created.'

There are many grand canal houses on Amsterdam's Keizersgracht. Even in that illustrious row, number 123 catches the eye because of the sculpted heads on the facade. It is therefore known as the House with the Heads.

Traditionally, this building has been a meeting place for free thinkers, as can be read on the information boards inside. Since 2017, the Embassy of the Free Mind museum of Stichting Het Wereldhart has been housed in the building. The author Dan Brown, known for the Da Vinci Code, performed that year's festive opening.
For his books, Brown was inspired by the private collection that forms the heart of the stately museum: the Bibliotheca Philosophica Hermetica. It is also called the Ritman library, after the Dutch businessman Joost Ritman, who funded the collection with the proceeds of his tableware factories De Ster. 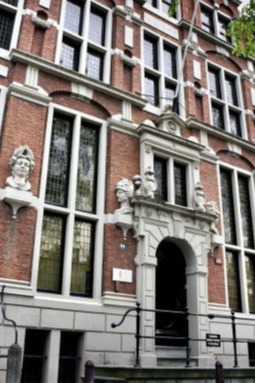 Unesco Memory of the World Register

Ritman's internationally renowned collection was recently added to the Unesco Memory of the World Register. Students and scientists use the library for research, and authors such as Umberto Eco and Harry Mulisch also found inspiration there.
In addition to being a sanctuary for free thinkers, the House with the Heads also serves as collateral for a mortgage loan totaling €6.3 million that the foundations behind the museum and the library collection closed with the De Vrije Geest foundation. Michiel Mulders manage the latter foundation. He is the right-hand man of near-billionaire Willem Blijdorp, founder of the B&S stock exchange fund. Mulders is the director of the Luxembourg company Sarabel, where Blijdorp has placed most of the B&S shares.

But it didn't stop with this mortgage loan. The FD previously revealed that Blijdorp, as B&S commissioner, provided a mortgage loan to B&S CEO Tako de Haan via De Vrije Geest at the end of 2018, which was concealed from investors. The CEO's private home in Het Gooi is collateral for €4 million. Eumedion, the representative of institutional investors, questioned this unusual state of affairs. After all, Blijdorp supervises the CEO as a supervisory director.

Blue Tower of hotel family Shi
In January 2020, Blijdorp donor foundation De Vrije Geest opened an even more extensive credit line, €18 million, with a mortgage loan to the Dutch company Blue Tower Tussenholding of the Chinese-Dutch hotel family Shi. This is evident from information that the FD has requested from the Land Registry and the Chamber of Commerce.

At the time, three members of the Shi family were the subject of a long-running and highly publicized criminal investigation. One member of the Shi family had been sentenced to one and a half years in prison for kidnapping and threatening a metropolitan restaurant owner almost a year before the Blijdorp foundation provided the mortgage loan.

View of any conflict of interest
The notable credits do not come from the listed wholesaler of beverages and foodstuffs B&S — supplier to, among others, the American army and the United Nations — but from the De Vrije Geest foundation of the majority shareholder in B&S, Willem Blijdorp. 'But investors do want to have insight into possible conflicts of interest when transactions with affiliated parties take place,' responds Gerben Everts, director of the Dutch Association of Effectenbezitters (VEB).

'Blijdorp owns 67% of B&S. You want to know from him in what kind of environment he operates in business, whether dependencies are created. Providing mortgage loans to people suspected or convicted of money laundering is relevant information.' According to Everts, this should have been reported in the B&S annual report and it should have attracted the auditor's attention.

Special shareholders' meeting
The striking financing by the great man of B&S is interesting in light of the special shareholders' meeting (BAVA) next Thursday. Blijdorp initiated that meeting because he wants to fire chairman of the Supervisory Board Jan Arie van Barneveld after he had helped to stop a bid from Blijdorp to take the company off the stock exchange again.

According to B&S CEO Tako de Haan, Van Barneveld was not aware of the loan from Blijdorps foundation to him. That CEO, in turn, has the lender's other credits

of his mortgage loan, such as to the Shi family and the Ritman library, cannot be reported in the B&S annual report. Because 'I was absolutely not aware of this situation', explains De Haan. He refers to the De Vrije Geest foundation, which, like Blijdorp and its lawyers, no longer responds to questions from the FD.

Eleven floors
The Blue Tower Hotel, on the A10 in Amsterdam's Bos en Lommer district, has eleven floors. It is one of eight XO Hotels operated by the Shi family in the capital and serves as collateral for the million-dollar loan from Blijdorp foundation De Vrije Geest to Blue Tower Tussenholding. Sole shareholder and director of that company is company Ypsilos. Its owners are Changkun Shi and his sister Jinhua.

When Blijdorp provides the million-dollar credit to the Shi's company through his foundation, Changkun and Jinhua, together with their brother Changyun, are the subject of the controversial Offside criminal investigation. This will lead to their convictions by the Amsterdam court on 19 July 2021. The brothers receive respectively 36 and 48 months in prison, the sister a prison sentence equal to pre-trial detention plus 240 hours of community service.

The court declares them guilty of money laundering, including through fake loans. In reality, according to the judiciary, they paid those loans themselves by first transferring large amounts to the providers. At Changyun, according to the court, people smuggling, forgery and leading a criminal organization are added.

'He wants to help us a little'
Changkun Shi took 45 minutes last Monday to explain to the FD his credit line with Blijdorp by telephone. 'The mortgage has only been registered with the Land Registry, but the money has not been provided,' says Shi. "It just means that if we need money, Mr. Blijdorp is willing to provide it."

The mortgage loan remained registered after the Shi's convictions. Does Blijdorp disagree with the court ruling? "He knows all the lawsuits," replies Shi. "He knows me and he knows my situation." Shi does not tell how they met.

'What happens to you is not as it should be', according to Shi Blijdorp was the driving force. The Shi family has not asked Blijdorp for funding. "He offered it himself." According to Shi, that was when the first corona outbreaks in China predicted disaster for the hotel industry. "He really does it from his heart. He's not in it for the money. Someone who has a billion doesn't need more money. He's not interested in the hotels.'

Changkun Shi urges the FD not to publish about the mortgage loan from Blijdorps foundation to the family, which can be found in public sources. "We already have a lot of problems because of the lawsuits."

Shi says he fears that a publication could lead to hassle with compliance departments. Moreover, says Shi: 'Soon we can say to Willem: it is no longer necessary.' A day later, Shi's lawyer Marcel van Gessel informs us that 'the mortgage registration has been canceled today in the Land Registry because this facility is no longer used'. He also reports that an appeal is pending against Shi's convictions.

'Difficult to get real estate financed.'
According to Jozef Ritman, the Ritman library and Stichting Het Wereldhart teamed up with Blijdorp as financier 'because it is difficult for an ANBI to finance its real estate. An ANBI is a public benefit institution, such as the Ritman Museum. Ritman says that then 'private lenders are often called upon. Ritman reports that 'Mr. Blijdorp showed his willingness to financially support Stichting Het Wereldhart with favorable loan conditions through the mediation of Mr. Jons Hensel'. Hensel is the former chairman of the hockey club Amsterdam. Ritman: 'Mr. Hensel supports our mission and has supported the ideas of the collection for decades.' According to Ritman, Hensel also gave Marnixkade 96-97 as collateral for the loan to the museum in addition to Keizersgracht 123. In the mortgage deeds, the Marnixkade 96-97 foundation of the real estate man Robbert Klaver also plays a role as a borrower of €6.4 million from the Blijdorp foundation. Klaver reports that he does not know that their lender also lends money to convicted money launderers. 'We are not aware of any loans that Stichting De Vrije Geest later granted,' says Jozef Ritman.