The American organization United Against Nuclear Iran (UANI) calls the simultaneous business relations of major shareholder Willem Blijdorp of B&S Group with Iran and the United States 'a clear violation of the Iran sanctions' by the international community. This says research director Daniel Roth of UANI to the FD.

Roth responds to the disclosure by the FD on Wednesday that Blijdorp has engaged at least nine employees and executives of his listed wholesaler B&S BSGR €5.00-7.06% in recent years in his investments of €75 million in nine Iranian marble mines. B&S, in which Blijdorp owns 67% of the shares, is also a supplier to the American army. Iran and the US are mortal enemies. 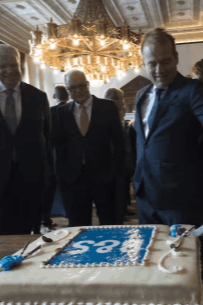 Marble mining is subject to sanctions

Roth points to the US government decree numbered 13902. It explains what is covered by US sanctions against Iran. “Marble mining in Iran, like any other form of mining in Iran, is definitely part of that,” Roth said.

To put it mildly, according to Roth, Blijdorp's behavior can be characterized as 'sailing close to the wind'. But the fact that the company he founded in Dubai for the exploitation of his Iranian marble interests, Stone Trade International DMCC, is located at the same address as B&S subsidiary B&S World Supply DMCC, is "reason to be very concerned about that", according to Roth. He sees it as "very clear evidence" of violation of US sanctions against Iran. Current B&S director Niels Groen was statutory director of Stone Trade International DMCC.

UANI is an independent American non-profit organization that works to prevent Iran from amassing the resources for a nuclear program and "performing terrorist activities." That is why UANI monitors compliance with the sanctions against Iran.

Roth also points to the US government document Iran Notice Q99. That mandates that trade relations of U.S. government suppliers, such as B&S, must report to the Federal Security & Exchange Commission any business ties or trade relationships with Iran. However, Roth cannot find any reports there from B&S or B&S affiliated entities.

A rare case
Roth calls the marble mining interests of B&S majority shareholder Blijdorp a rare case. 'Usually it is about getting business into Iran or financial traffic. This is about getting things (Iranian marble, ed.) out of Iran.'

Dutch law firm Stibbe reiterated on Thursday on behalf of Blijdorp and B&S in response to the FD revelations "that the fact that B&S employees are involved does not mean that B&S is involved" in the Iranian investments of the B&S majority shareholder. No sanctions have been violated, according to Stibbe.

In a supplement, Stibbe reports that not only were a current director of B&S and a former CFO of B&S active for his Iranian interests because of their long-term 'trust-based working relationship' with Blijdorp, that applies to all nine involved in the Iran deals, according to Stibbe. B&S employees.